The man who once was said to have been held in captivity in Hanoi, North Vietnam and tortured for not cooperating with his captors has opted once again to thwart President Trump. With all of the information that has since emerged about McCain’s penchant for creating propaganda films for the North Vietnamese (reports place the films anywhere between 30 and 38 of which were played over and over for the rest of the captured POWs/MIAs), as well as his ability to create obfuscation on the POW/MIA records about those that we left behind in Vietnam, it’s really not a surprise when he thumbs his nose at our president.

Recently, he was also involved in the effort to save the Affordable Care Act (otherwise known as ObamaCare), another campaign promise unfulfilled. If we didn’t know any better, we might believe that McCain is still angry about the whole “he shouldn’t have been captured” remark.

Regardless, in a hearing discussing the authorization of 3K more US troops to be sent into Afghanistan, McCain has been the one big Swamp RINO obstacle in the way of our generals and Secretary of Defense from keeping the enemy from vital information about troop deployment, troop movement, and level of engagement.  He has shown painstaking resolve in making sure that the precious appointments for the Pentagon under President Trump will remain unfilled as long as possible, knowing full well that this particular behavior only serves to bolster the enemy and to make America unsafe.

McCain is insisting that he will not grant any authorization until he has deigned himself fully apprised of every detail necessary to claim victory in these endeavors abroad. Like President Jimmy Carter in the 1970s, McCain is attempting to place himself at the head of our military without truly knowing anything about being a general on the battlefield!

During a Senate Armed Services Committee hearing on Afghanistan, McCain informed Defense Secretary James Mattis and Joint Chiefs of Staff Chairman Gen. Joseph Dunford that he will continue blocking the Trump administration from filling spots in the Pentagon until he’s fully briefed on the strategy for Afghanistan and Iraq, Defense News reports.

The Trump administration finally issued a strategy for Afghanistan in late August, and although it entails sending more troops to the region to advise to the Afghan military, it’s unclear in the strategy what conditions would count as success. The Pentagon intends to send about 3,000 more troops to the conflict.

McCain’s hold comes at a time when 70 percent of Pentagon positions that require Senate confirmation remain unfilled, which means that the hold will delay the filling of those positions even further, as the Trump administration has been much slower at filling positions than past administrations. 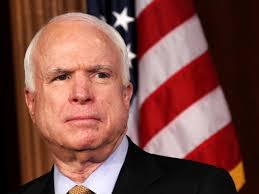 The delay is preventing the confirmation of Trump’s pick for secretary of the Army, Mark Esper, and his pick for Undersecretary of Defense for Personnel and Readiness, Robert Wilkie. 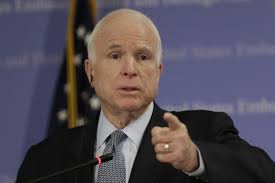 Here is McCain’s unmitigated gall on full display: “When I got reelected, I said I would support and defend the Constitution.” Is this guy kidding me? How about this, senator? When you got reelected, you said you would repeal ObamaCare. You didn’t do that? What makes this promise any different?

Nice try, senator. We’re all well aware that you’re about as ready to assist the president as a grizzly is ready to pass up a pool full of salmon. This is a humiliation and this man should be ashamed of himself. For the amount of money that he currently earns, in addition to his full disability pension from the military, his many foreign nation corporations that he has invested in, his very lucrative Clinton-styled McCain Foundation, not to mention his Cadillac healthcare plan that Americans aren’t good enough to receive, and his fully paid travel and holidays, vacations and breaks, this guy should be thanking God that he sponges off the taxpayers in a country like this, instead of somewhere else. Do us all a favor and grant our president the ability to ensure America’s safety, Mr. Senator!