Liberals simply adore the ability to take what isn’t theirs. Whenever there is anything that the Left wants for itself, they simply enact some sort of law or order that will transfer power and authority to them and then act on that newfound power. If there is a watershed that the federal government believes would look nice in their curriculum vitae, they sign an order that a small snail species is endangered and voila! The land is theirs in perpetuity.

Another favorite of theirs is to take old laws that no longer suit them and declare them to be inactive, as in the case with the Bunkerville Allotment near the Cliven Bundy Ranch where they stole his land and his cattle over a matter of $8,815!

Of course, there is another way. When Presidents Clinton and Obama signed executive orders to confiscate Utah state land by declaring two of its natural landmarks as having many more millions of acres that it was actually conceived to have, the result was one of the biggest land grabs in the nation’s history. Donald Trump has called both senators from Utah, Orrin Hatch and Mike Lee, as well as the governor, Gary Herbert, to let them know that he was nullifying both the Clinton and Obama Executive Orders and restoring the land back to Utah! 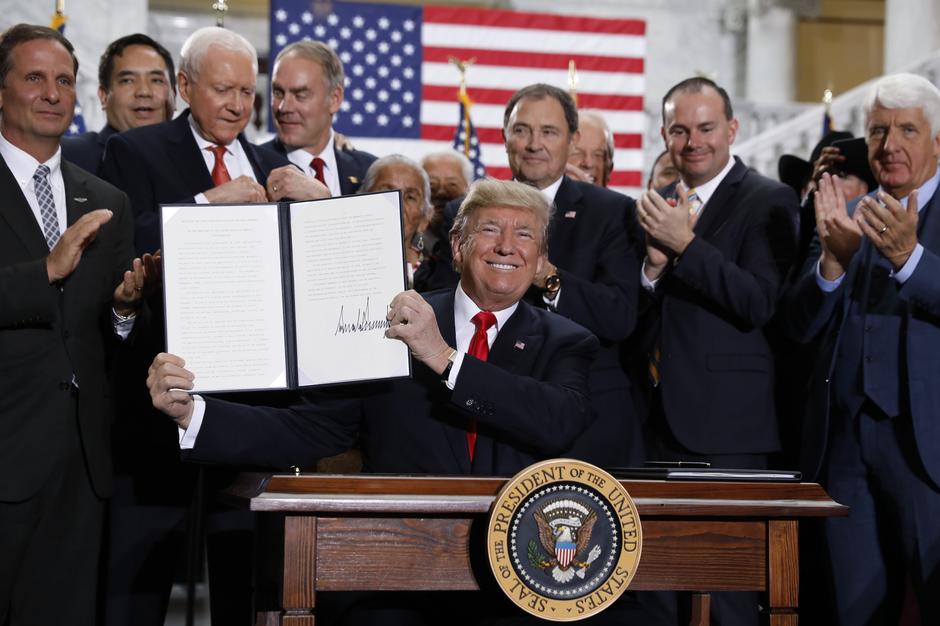 Capping months of speculation, President Trump on Monday signed a pair of executive orders to significantly shrink two of Utah’s national monuments – Bears Ears and the Grand Staircase-Escalante – that were created by his Democratic predecessors.

The controversial move was pitched by Trump as a win for states’ rights and follows an April review conducted by Interior Secretary Ryan Zinke on the boundaries of large national monuments. The review initially looked at more than two dozen sites designated by presidential decree since the 1990s.

Trump’s presidential proclamations cut Bears Ears by 85 percent and Grand Staircase-Escalante in half. The action is also likely to trigger a legal battle that could alter the government’s approach to conservation.

Utah’s congressional and state leaders lobbied the president to reduce the size of the monuments so the state would have more control on what can be done on the land.

Republican Sen. Orrin Hatch of Utah praised the announcement and said Trump was giving the people of Utah “a voice in the process.”

Zinke maintained Monday that the move should be seen as correcting an overreach by the federal government.

Former Interior Secretary Sally Jewell, who was instrumental in designating Bears Ears monument, tweeted Trump’s actions “will make him the most anti-conservation president in our history. He will be challenged by tribes and thoughtful citizens that recognize that some places are too special to develop.”

Just for the record, you will recall that Sally Jewell was the Interior Secretary under Obama who wanted an LGBTQIA placard at every major national park to designate the “gay community’s contributions to the nation’s parks” and also explained that the move made gays feel more comfortable when going out of doors.

I would like to just throw out there that, if this makes Trump the most anti-conservation president in our history, then her actions less than two years ago make her the most anti-heterosexual/straight Interior Secretary in our history. Maybe, Ms. Jewell, you should’ve asked the citizens of Utah what they thought before opening your big yap. I’m just sayin’.