Paul Ryan is one of those Republicans who appears to be perennially trying to distance himself from the conservative roots of the party of which he is supposed to be a top leader. It’s as though he is either ashamed of conservative principles, or never really believed in all that stuff in the first place. As a result, true conservatives don’t trust him, and for good reason.

How many times did the Republican House pass Obamacare repeal legislation while Mr. Obama was still in office making it a symbolic gesture at best? Yet now that there is a Republican majority in both houses of Congress and a Republican in the White House, Mr. Ryan has had problems getting the job done. It’s as though now that their actions might mean something, Ryan was reluctant to take that action.

The time between now and the 2018 elections are an eternity, politically-speaking. Yet, if current polls continue to trend the way they are now, Mr. Ryan’s career might be cut short. To be blunt, his numbers are tanking.

“According to a new Bloomberg poll, taken between July 8-12, the House speaker’s positive rating has tumbled to 34 percent, while his negative rating has risen to 48 percent.

“In the poll, his positive rating was lower than that of the Republican Party (37 percent), President Trump (41 percent) or the Democrat Party (42 percent). The telephone poll included 1,001 Americans and had a margin of error of plus or minus 3.1 percent.”

That’s quite an accomplishment for Mr. Ryan. 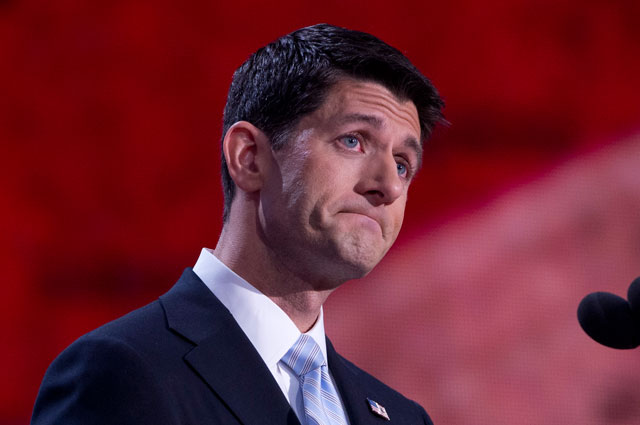 “The House speaker is also losing his favorability among Republicans; only 61 percent view him favorably, compared to 67 percent in the December survey. His unfavorables are up from 16 percent to 21 percent over that period, as well.”

Mr. Ryan demonstrates the danger of straddling issues. He is neither conservative nor liberal, and has one foot in each camp. He would deny that, of course, but his record shows otherwise. And the voters are figuring it out as well.