For more than a few months, the military has been on notice for anything issuing from the mouth of Kim Jong-un. It’s not often that the military is put into a position where alerts could come at any time, but it certainly happens on occasion when tensions between nations runs as high as they have been with North Korea. When Pyongyang began issuing his threats and following them up with the launching of missiles, the stakes were already high. Now that his military is toying with nuclear capability, it’s no longer just a matter of if a strike happens, but how devastating to the American public will it be.

We do not even know the US military’s capabilities when it comes to dealing with a strike that has already been launched. Many surmise that we may in fact have the ability to shoot these missiles down from the skies, but others doubt that capability. There are even some who say that without prior notice, we cannot guarantee that even one of these missiles can be stopped once they have been launched,

That being said, Secretary of Defense, General James “Mad Dog” Mattis has sought to calm the American public down a bit with his Dirty Harry-esque type responses to challenges by our enemy. Recently, he was discussing the potential of an armed conflict with North Korea. Following a comment by the president stating that the military heads standing around him represented the “calm before the storm,” he tweeted that he believed that only one type of end result will be gotten with Kim Jong-un.

Mad Dog followed up with his succinct instructions to the military: “Stand ready!” And Liberals could not be more upset at the prospect of the United States standing up to bullies around the world, instead of bowing down to them like Barack Obama did! 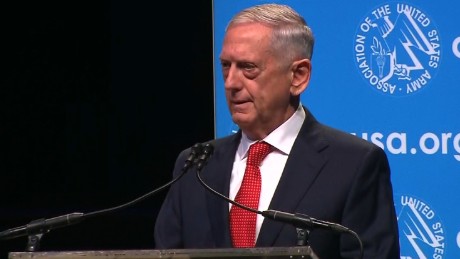 Defense Secretary Jim Mattis warned Monday that the military must be prepared for war. North Korea’s aggressions are increasing. President Trump seems to be convinced that armed conflict will be necessary.

“It is right now a diplomatically, economic-sanctions-buttressed effort to try and turn North Korea off of this path,” Mattis said. War would be ugly, but it’s a relief that our security is in Mattis’ capable hands. He’s won the Army’s respect, and for good reason. His career is speckled with incidents of military bravery.

“What we want to do is be so ready and be very much aware that we fight the way we come, that everybody in the world wants to deal with Secretary Tillerson and the Department of State, not the Department of Defense and the United States Army,” Mattis continued.

“There is one thing the U.S. Army can do, and that is you have to be ready to ensure we have military options that our president can deploy if needed.”

Tillerson’s negotiations with Pyongyang are ongoing, but we’re approaching the point where diplomacy will have to be forgotten. If Kim Jong Un fires a missile at Seoul it could set off WWIII.

I do not believe that the start of World War III would be initiated by North Korea attacking its southern neighbor, no matter how egregious and horrifying that might be. However, a strike of that nature, or at Japan, Guam, or the American mainland, Hawaii, or Alaska, would be a fatal mistake of colossal proportions. It would be, without a doubt, the single worst decision by a nation since Barack Hussein Obama gave Iran the ability to create nuclear weaponry.

Once a strike was initiated by North Korea, the resulting fire and fury that would follow would be on a scale that would be difficult to describe.  Without a shadow of a doubt, though, North Korea as it exists today would cease to be. Kim Jong-un would no longer be in power and its people who have suffered greatly for decades at the evil dictator’s family’s hands would finally be free of the yoke that has been placed upon them. There is not a nation in the world, besides Iran, that would stand with them should this maniac strike the US or one of its allies, and it’s a very good thing that we have a capable general in charge at the highest levels of government.