After a few days of blaming the National Rifle Association, Trump supporters, the 2nd Amendment, and bump fire stocks, the Fake News Industrial Complex finally lapsed a bit on its coverage because it had been noted that Las Vegas shooter Stephen Paddock had been a rabid Leftist with more hatred for President Trump than the average pea-brained far-Left antifa thug.

It never takes long for the FNIC to cover each and every shooting as if it was actually perpetrated by an NRA member, or just any random passing Republican, whether or not they even own a weapon. Joe Biden, just the other day in an appearance on the Today show, spent a whole two minutes deriding the man who ended Sutherland Springs church shooter Devin Kelley’s life after he killed and injured more than a dozen people, because the man credited by law enforcement as having stopped the spree used an AR-15 to do so!

Now, the newest story is that of a man named David Kenneth Smith, a Democrat who was arrested after he made a series of videos going after President Trump and stating that people should begin shooting mass amounts of Trump supporters as a political statement! When police investigated, they found that Smith had an enormous stash of weapons and ammo! Here we go again!

It’s starting to look like a trend: Yet another unhinged leftist has promoted violence against conservatives.

Earlier this month, a California man was arrested and a cache of weapons was seized after he posted several bizarre videos bashing President Donald Trump, and suggesting that people should go on murder sprees.

David Kenneth Smith, 39, of West Hollywood was brought to the attention of law enforcement after he sent a disturbing video of himself holding a gun to Soka University, a liberal arts school that he once attended.

That specific video has not been released, but other twisted videos made by Smith are public. “In another video, posted last week, Smith goes on a strange rant about choosing between suicide and mass murder in a video titled ‘What Good Does Killing Ever Do?’” reported the Los Angeles Times.

“What should I do? Should I commit suicide and just die off in a corner where all of you folks out there are just … well, hey, I guess that problem took care of itself now, didn’t it?” asked a hauntingly smiling Smith in one of his videos.

“We’ll never have to ever have any reckoning at all for what we did to him and so many other people. I’d rather go on a killing spree,” he declared.

Other videos made by David Kenneth Smith show him praising Barack Obama and accusing Donald Trump of “trying to kill us,” which is likely connected to his threats of a “reckoning” through a mass shooting.

In one of those videos, Smith called Trump a “monster” while posing with a semi-automatic shotgun. Another twisted video featured the leftist threatening a YouTube commenter by name, again while grinning maniacally and holding a gun. 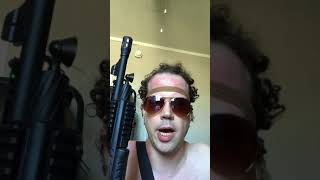 What this comes down to is a comedy of errors on the part of the Democrat Party and its far-Left proponents. There is never enough of an outcry from the DNC or the Left when one of their own does something terribly wrong, yet when a man protects his property from a home invader and shoots the perp, suddenly there’s a court case involved and jail time threatened.

It sure seems sometimes that the laws were written specifically to protect the guilty and punish the victim. Even if that isn’t truly the case, it does not surprise me in the very least that this Smith character hated Right wingers so forcefully that he wanted to put an end to their lives. It seems to be a growing trend among Leftists that if you cannot defeat them in the ballot box, kill them.