We have reached a point of ultra-saturation in the Fake News Industrial Complex and a point of no-return for the hapless Democrats in search of a message and a way to somehow connect with the average American voter. Someone really needs to tell the DNC that they cannot “connect” with America by insulting them and calling them extremists. That should be their first lesson.

The FNIC has famously come to the point where they cannot find a single, solitary thing good to say about Donald Trump. The Leftist activist press has become so poisoned with its own self-loathing that it is now creating headlines about mundane things that would appear to any Democrat candidate as an endearing foible. Take, for instance, the CBS News headline that Donald Trump had an “awkward moment with a water bottle on live television!” [GASP!] Really? A water bottle? My word!

This is how far down the road of perpetual sophomoric projection we’ve gone. While Democrats struggle to answer simple questions as to why they appear only able to win elections in places that are solidly Left already, the FNIC ensures that not too much focus is placed on that and, instead, queues up the victory lap speeches for their wins in New Jersey and Virginia. As they are doing that, the Democrats in Congress are working hard at deflecting reality by fixating on impeachment talk. This should make Maxine Waters smile for the rest of the year. Six Democrats have now introduced articles of impeachment against our president!

A group of six Democratic House members introduced articles of impeachment against President Donald Trump Wednesday, claiming the president has violated federal law, the public trust and should be charged with high crimes and misdemeanors.

Democratic Reps. Steve Cohen of Tennessee, Luis Gutierrez of Illinois, Al Green of Texas and Adriano Espaillat of New York introduced five articles of impeachment at a press conference at the Capitol Wednesday. The articles have two more co-sponsors: Reps. Marcia Fudge of Ohio and John Yarmuth of Kentucky. 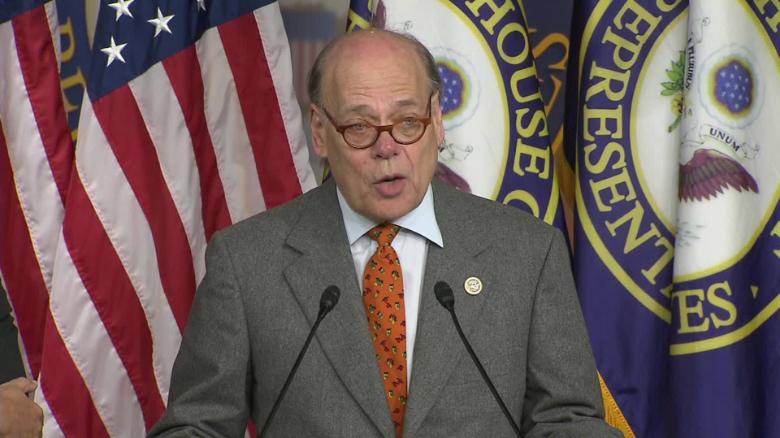 The articles focus primarily on Trump’s handing of the termination of former FBI Director James Comey, and potential conflicts of interest with Trump’s businesses and properties while he’s served as president.

Cohen said they are simply calling for the House to begin hearings on the articles.

“We believe that President Trump has violated the Constitution, and we’ve introduced five articles of impeachment,” Cohen, the ranking member of the House Judiciary subcommittee on the Constitution and Civil Justice, said Wednesday.

The Tennessee congressman also said there are at least “a dozen other members who are close” to joining them in calling for Trump’s impeachment.

Cohen said that House Minority Leader Nancy Pelosi understands why they are bringing forth the articles, even though she does not agree.

Pelosi said in early November that she thought impeachment is “not someplace that I think we should go,” and that Democrats should be focusing “first and foremost” on trying to “unify the nation.”

Republicans are currently focused on pushing tax reform through Congress before the clock runs out on the 2017 legislative calendar.

“House Democrats lack a positive message and are completely unwilling to work across the aisle, so instead they’ve decided to support a baseless radical effort that the vast majority of Americans disagree with. Republicans are focused on issues the middle class actually cares about, like cutting taxes and growing the economy,” Michael Ahrens, a spokesman for the Republican National Committee, said in a statement to The Daily Caller News Foundation. If ever there was a cry for help on the part of the Democrat Party, this is it. Hopefully, the FNIC will come to their rescue (and you know they will) because the piece de resistance to cap off this year would be a stunning rejection by the American people of this ridiculous and baseless attack on the president.

Fortunately for the Republican voters, this effort will only serve to draw more voters for our side, and to leech away voters from the Democrat Party (as happened during the election last year when Trump took literally tens of thousands of voters from the Democrats). If this impeachment business holds out until the elections of 2018 (and hopefully it will) we will be sitting pretty come 2020.