In spite of his being a hard-core leftist who has never really accomplished much other than getting elected U.S. Senator, you almost have to give Bernie Sanders a bit of respect. After all, he was not afraid to go after Hillary in the primaries, something you didn’t seen any other Democrats seriously take a crack at. And his candidacy was taken seriously enough that elements of the DNC were alleged to have found it necessary to conduct surveillance operations and other actions to damage his campaign lest he represent a real threat to Hillary. And he did appeal strongly to the millennials, although the value of that accomplishment is in doubt.

Yet he remains a marginal figure who is really in search of an explicitly Marxist political party with which to affiliate, the Democrats apparently not even leftist enough for his tastes.

While the crime would never even scratch the surface of the corruption of Hillary Clinton, it appears that Bernie has been breaking the law. Get ready. It is alleged that he has been stealing his neighbor’s newspaper. 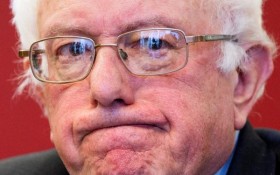 Here’s the story as reported by WMAL radio. We’ll just reproduce the whole thing because there are enough details scattered throughout it that to edit it would be an offense almost as serious as stealing your neighbor’s newspaper.

“Bernie Sanders and his wife Jane when they are in Washington DC, live in this house on Capitol Hill, ok? Part of their vast real estate empire. They’re like wannabe Trumps with their real estate holdings.

“[The neighbor] said, ‘Oh, ok, I’ve been coming out and picking up the paper?’

“‘Yes, and we got a description from the delivery person. You are an older man with gray hair, balding, and little round glasses…’

“And Bernie Sanders has been coming out every Sunday morning and stealing his next door neighbor’s Washington Post.” Where do we get these misfits who wind up in public offices? Can’t Senator Sanders find a line item in his budget to pay for a newspaper if he’s financially strapped himself? At least getting the news, even from the leftist Washington Post, seems like a reasonable expense for senator to incur. Maybe he could call the paper and offer to do a couple of interviews in return for a free subscription.

Laugh if you want. And poor Bernie has just made a buffoon out of himself. But what kind of a nutjob swipes his neighbor’s newspaper?

On the other hand, this might help his prospective 2020 campaign. At least he can admit to his crimes with little chance of incarceration unlike Hillary.

And just to show that junior high school level humor can be funny even for adults, wouldn’t it be something if 1,000 people bought Bernie a subscription to the Sunday Washington Times so he had to pick up 1,000 copies of the paper from his front yard every Sunday?