If our president is looking for swamps to drain, he can get started now by removing the U.S. from the United Nations. That swamp is not only useless, but contains some of the most vile creatures of all. What happens when you add lots of money to an unaccountable international organization? You get corruption and waste on a scale that’s hard to imagine – in other words, the United Nations. Since liberals love big government, it just makes sense that they would love super-big government such as the U.N. But what is going on there should turn the stomachs of even the most die-hard U.N. supporters.

In spite of its dismal record of failing to stop war or to promote peace, there are sporadic instances where the U.N. has provided some humanitarian relief. Yet even that has been corrupted by an institution that lacks accountability. Does paying starving children food and money for sex count as a humanitarian program? In the world of the U.N. it is, and the practice is beyond despicable.

While there is no doubt that Providence will deal with those who would extract sex from a hungry child in return for money, it would be nice if something were done before these criminals move on to face their final judgement. Don’t expect that anytime soon, though, unless someone in power knocks the daylights out of the U.N.

Here’s an example of the U.N. in action: “In Haiti, according to the AP, U.N. peacekeepers would often use food and money to lure children — sometimes as young as 12 — into having sex with them, yet not one of these monsters has been brought to justice.”

Since nothing has been done to right this wrong, that is reason enough to close down the U.N. permanently. Not only has it failed in its mission, it is a menace to the people, and obviously the children, of the world. Those nations that allowed their soldiers to do this without punishment must be publicly identified and subjected to the most damaging of economic sanctions until they bring these degenerates to justice.

Here’s an excellent example of the appropriate attitude toward the U.N.: “‘If I heard that a U.N. peacekeeping mission was coming near my home in Chattanooga,’ Tennessee Republican Sen. Bob Corker stated to the AP, ‘I’d be on the first plane out of here to go back and protect my family.'” 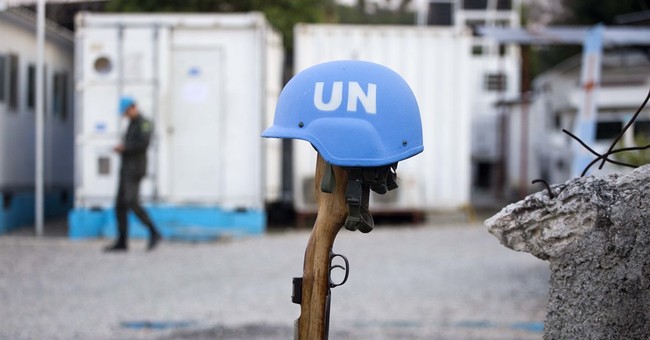 Taking advantage of starving little children to feed their twisted lust? The U.N. just set a new low. Close it down and throw the officials who permitted this in jail.