Wouldn’t you have guessed it? The Ninth District Court is back at it again. They were the first to block President Trump’s first travel ban order, and they are once again the first to stop the president’s order to defund sanctuary cities. It wouldn’t bother me, and most Americans, if these orders were halted due to the judge’s impartiality, but we all know that these specific judges out of California have nothing to do with impartiality but everything to do with politics. They are legislating from the bench once again.

The particular judge who ended Trump’s recent order, Judge William Orrick III, has some political skeletons in his closet. It seemed so easy for him to block this order. Why? Because he’s a huge Obama fan. So huge, in fact, he helped Obama raised upwards of $200,000 for him, and donated $30,000 to organizations that support the former president.

Orrick, of the Northern District of California, issued an injunction against the Trump administration after the city of San Francisco and county of Santa Clara sued over the president’s plan to withhold federal funds from municipalities that harbor illegal immigrants.

The ruling from U.S. District Judge William Orrick III in San Francisco said that Trump’s order targeted broad categories of federal funding for sanctuary governments, and that plaintiffs challenging the order were likely to succeed in proving it unconstitutional.

The decision will block the measure for now, while the federal lawsuit works its way through the courts.

The news comes on the heels of the Department of Justice threatening on Friday to cut off funding to eight so-called “sanctuary cities,” unless they were able to provide proof to the federal government that they weren’t looking the other way when it came to undocumented immigrants.

At the time, The Federalist found that Orrick raised at least $200,000 for Obama and donated more than $30,000 to groups supporting him. 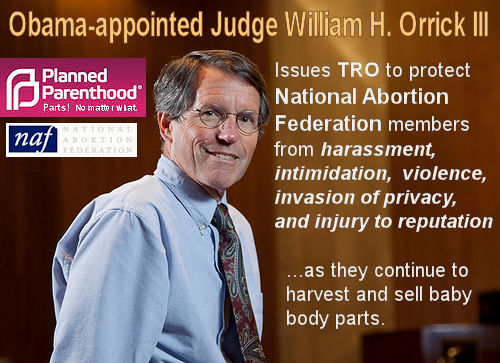 To me, it’s time for Congress to step up and work toward impeaching those judges who are clearly doing Congress’ job from their court seat. What do you think? Comment below?